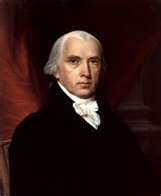 Welcome to the James Madison Chapter

The James Madison Chapter is named after President James Madison, who declared the War of 1812 against Great Britain. He is one of two presidents that exercised direct battlefield authority as Commander-in-Chief during the Battle of Bladensburg, the other was George Washington who rode out and personally crushed the Whiskey Rebellion.

Fifteen women were invited by Marilyn Jarvis on July 26, 2015, to the London Masonic Temple at 2:00 p.m. for the purpose of a Preliminary meeting to organize a US Daughters of the War of 1812 chapter.

The organizing meeting was then held on September 27, 2015, at the Masonic Temple in London, Ohio at 2:00 p.m. At this meeting officers were welcomed, and the bylaws were set. Our first regular meeting was held November 28, 2015, at Teaberries in Springfield, OH at 11:00 a.m.

The chapter holds traditional meetings four times a year on the fourth Saturday in the months of February, May, September and November unless otherwise noted.

All meetings include, the Ritual, The Pledge of Allegiance, Salute to the Flag of 1812, and The American’s Creed. See the Calendar page for our scheduled meeting dates for 2022 – 2023 and a list of exciting programs.

If you are interested in becoming a member of the National Society United States Daughters of 1812 or have questions about our chapter, contact the chapter President for details. We welcome you to join us. 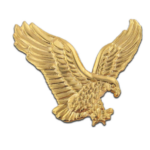 •~•
Scripture:
“But those who trust in the Lord for help will find their strength renewed. They will rise on wings like eagles; they will run and not get weary; they will walk and not grow weak.”    Isaiah 40:31
•~•
Motto:
Liberty, Fraternity and Unity
•~•
Colors:
Blue & Gray
•~•
Flower:
White
Carnation